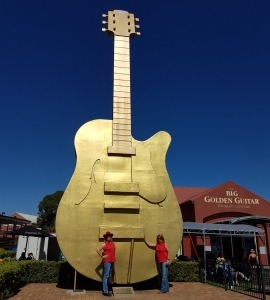 What an amazing and interesting “music, opals and silver” tour we’ve just had, visiting parts of South Australia, NSW, and Victoria. The tour focused on the Tamworth Country Music Festival, complete with buskers and street acts, well-known musicians such as Lee Kernaghan, Troy Cassar-Daley, Beccy Cole, and Kasey Chambers to name a few, stalls, street events, a cavalcade, and fireworks. The atmosphere was electric with something for everyone, and we were especially pleased to see local talent Kimberley Gold get to the finals in the buskers competition.

Other than the festival, we travelled to the famous opal town of Lightning Ridge where we caught our breaths, stayed two nights, and were treated to a fascinating underground walk-in mine tour on one of the days.  And yes, an opal or two was purchased!  Lightning Ridge is a very interesting outback country town with lots to see and do, and some unusual characters to meet.

Another major stop on the tour included Broken Hill (famous for silver, lead and zinc), where we visited the miners memorial, the famous Palace Hotel (much of the movie “Priscilla Queen of the Desert” was filmed here), the living desert sculptures, and Silverton (where we met  country music singer Catherine Britt).

Other highlights on the tour included a paddle boat cruise on the Murray River in Mildura; the Parkes Observatory (where some of the film “The Dish” was filmed); the Bread Knife in the Warrambungles; the Back O’ Bourke Visitor Centre; and the beautiful historic town of Burra.

The tour was made even more successful with the country hospitality in towns we stayed at, particularly The Cameo Inn at West Wyalong.  Gail, the owner, is one of the nicest people we have met on our tours.  She runs her motel like a top notch five star motel, is always on hand to answer queries, and goes the extra mile to make sure you enjoy your stay.  We happened to be there on Australia Day and sure enough, she had little Australian flags on the breakfast table to get us into the patriotic mood.

We’ve returned with CDs, opals, silver, memorabilia and new friendships formed, and have decided to do it all again next year, with some surprising new changes.  Stay tuned for more information about that, along with news about our next brochure which is due out in a few months.

Previous postTamworth Beckons (as does Lightning Ridge and Broken Hill)!
Next postGibb, Bungles, and the Kimberley

Enquiry Form or link to book